"At a meeting of a number of persons convened at the City Council Chamber by the invitation of the Mayor, it was Resolved, That it be recommended to the Inhabitants of the City and Precincts, to meet at their several Wards, and in the Precincts, TOMORROW MORNING, at 10 o'clock, to choose three persons from each ward and each of the Precincts, who, together with the Mayor, shall constitute a Committee of Vigilance and Safety, during the present time of alarm, and that the committee thus chosen, meet at the Mayor's Office, at 5 o'clock, P.M. on WEDNESDAY, the 24th inst." 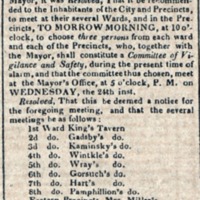