Francis Guy’s prospect of Baltimore meticulously records the city’s distinctive topographical features, from the cliffs of Jones Falls Valley and “Howard’s Elm” in the foreground to the dense cluster of buildings that stretches to the harbor front. The contrast between built structures and natural forms speaks to a landscape transformed by urban development. Many of the buildings are readily identifiable, including the octagonal Pantheon (left foreground), where Guy planned to exhibit panoramic paintings. His talent for rendering architecture also earned him commissions for “portraits” of the country estates of Baltimore’s gentry. 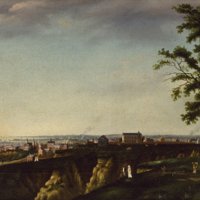