The Battle of Baltimore

A Sketch of the Military Topography of Baltimore and its Vicinity and of Patapsco Neck to North Point, 1814. National Archives.

The morning of September 12 saw 4,500 British soldiers land at North Point, a spot on the Chesapeake Bay to the south and east of Baltimore. As the British began to cover the 10 miles along North Point Road to Baltimore, they ran into a group of American forces at Bear Creek that were sent to harass the enemy and buy time for final preparations on Hampstead Hill. At this skirmish, called the Battle of North Point, British forces flanked the Americans, reformed their battalions, and routed the local defenders. While the battle was a British victory and the troops continued their advance to the city, the British lost their land commander when Major General Robert Ross was killed by a sniper.

While British soldiers marched towards Baltimore by land, the British Navy sent a force of frigates and bomb ships to advance on the city by way of the harbor. Just as Baltimore had prepared for a land invasion, the city had anticipated an assault by sea. Ft. McHenry, located at the narrow point leading into the city's harbor, was stocked with powder and troops, while merchant vessels were intentionally sunk in the harbor and long chains stretched across the water to prevent the advance of British ships. 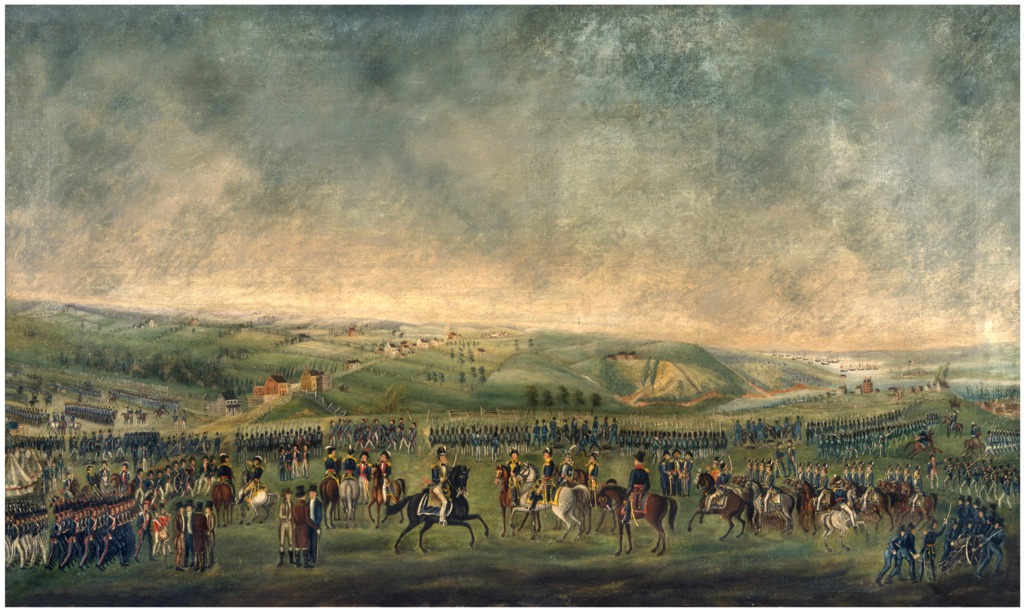 "Assembly of Troops Before the Battle of Baltimore" (c. 1814) by Thomas Ruckle, Sr. illustrates the view from Hampstead Hill. Maryland Historical Society.

The British troops arrived at the foot of Hampstead Hill on September 13 to find the strong defenses erected to protect the city.

“On the morning of the 13th leaving a small guard at the Meeting House to collect & protect the wounded we again moved forward towards Baltimore on approach which it was found to be defended by extremely strong works on ever[y?] side, and immediately in front of us by an extensive hill on which was an entrenched camp and great quantities of artillery, and the information we collected added to what we observed, gave us to believe that there were at least within their works from 15 to 20,000 men.”

—George Cockburn from "Report on Actions in the Chesapeake Bay" (1814)

“The woods suddenly ceasing we found ourselves in the midst of open corn fields, and well-cleared meadows. . . . The heights in question were occupied by an army of Americans; and such were their numbers, as well as the formidable nature of the preparations which they had made for our reception, that the least skillful amongst us became instantly aware, that some hard fighting, as well as judicious management, must be displayed, before we could hope to force this position.”

That afternoon, the British soldiers and Baltimore Defenders maneuvered for position. Each move the British army made was successfully countered by the Americans. Even when the British positioned themselves for a possible night attack, hoping darkness would provide a shield for their advance, an effective counter maneuver and heavy rain squashed British hopes for an easy win.

Where were the fortifications? 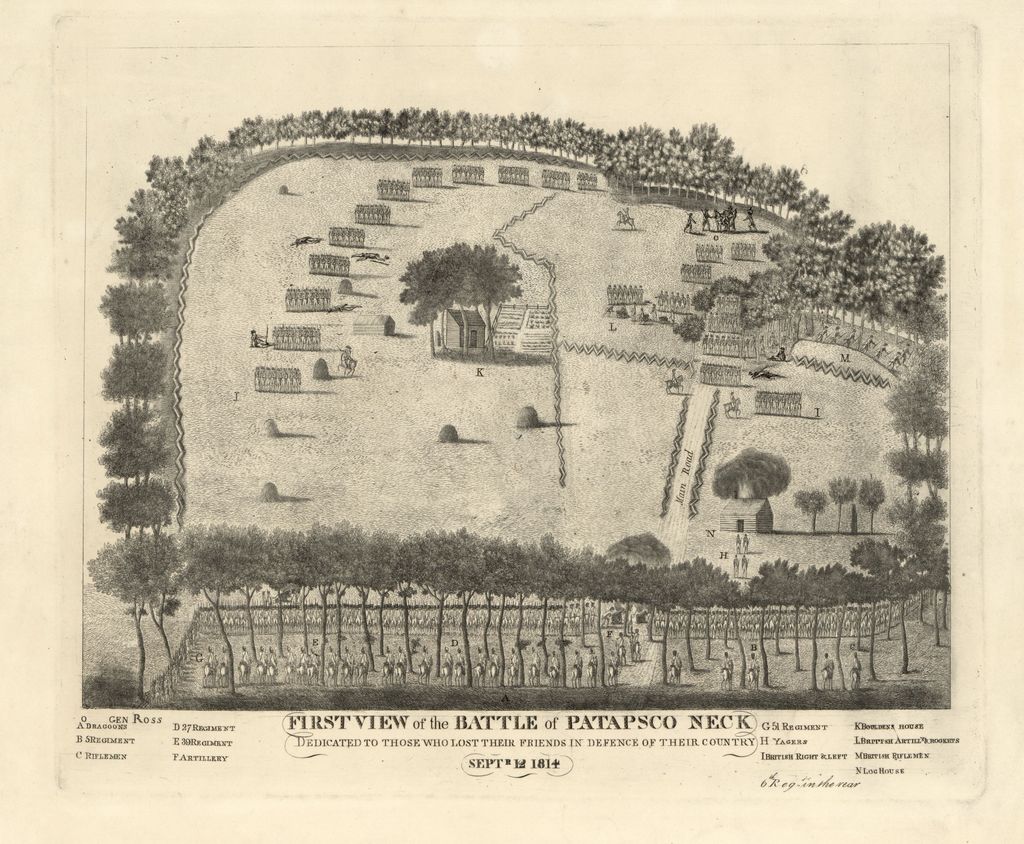 "First view of the Battle of Patapsco Neck" (Battle of North Point), c. 1814. Library of Congress. 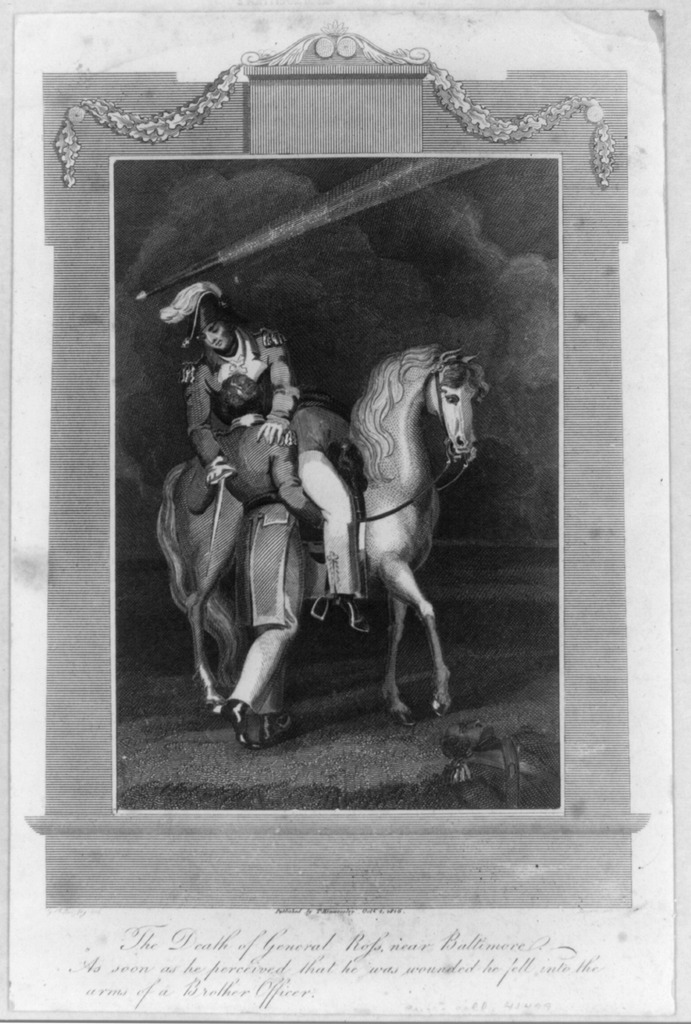 "The death of General Ross, near Baltimore," 1816. Library of Congress.

The British plan for Baltimore was to attack by land and sea simultaneously. With ships in Baltimore's harbor, the British could turn their substantial naval artillery towards the city to support the ground invasion. As the Defenders were holding out at Hampstead Hill, however, Baltimore's defenses were also holding out at Fort McHenry even under the intense overnight bombardment from September 13-14. Without naval support, the British soldiers at Hampstead Hill faced long odds.

The previous day’s loss of British Maj. Gen. Ross also aided Baltimore's defense. With Ross's death, Colonel Arthur Brooke was left in charge. This was Colonel Brooke's first independent command of any significant force. While his men stood ready for the attack, Brooke received word from Admiral Cochrane that the fleet could not make it into the harbor and that help was not coming. After taking a hard look at the long, rain-slicked slope that rose toward the crest of Hampstead Hill, crowned with guns and upwards of 20,000 Defenders, Brooke decided not to make the attack. The British turned back, and the Americans claimed the victory.

“It is in vain that we complain that their army at Baltimore was not brave enough to quit their entrenchments and offer us battle; could anyone believe that their leaders were so stupid as to expose raw and undisciplined troops to experience the courage and audacity of our veterans! No their business was to avoid pitched battles, and to practice the tactics that proved successful in their revolution, and which are perfectly suitable for a country covered with woods…” —London Morning Chronicle, October 12, 1814

As the British army retreated back to North Point and loaded onto the ships that had failed to get past Ft. McHenry, Baltimoreans celebrated the victory. However, they feared the British would return and for the next several months continued to add to the fortifcations that began on Hampstead Hill. The British in fact did not return and the Battle of Baltimore proved a decisive win for the Americans and a turning point in the war.

← Baltimore Prepares for War
Baltimore's Defenders →
The Battle of Baltimore