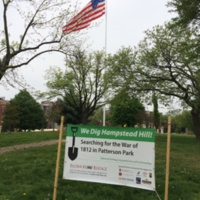 During the summer of 2001, the Historic American Buildings Survey (HABS) and the Maryland Historical Trust, in coordination with the Maryland Historical Society, the City of Baltimore's Historical and Architectural Preservation (CHAP) and Preservation Maryland, recorded ten historic buildings and sites within Baltimore's Central Business District through large-format photography and original historical research. The heart of the downtown area and focus of intensive redevelopment efforts, Baltimore's Central Business District is a designated city historic district and home to a diverse array of historic commercial and civic buildings, churches, theaters and other landmarks. Many of them predate the district's Great Fire of 1904 and chronicle Baltimore's rise as a financial, commercial and civic center. This project, resulting in more than 150 photographs by Baltimore area photographer James W. Rosenthal for HABS and ten detailed architectural histories by Laurie Ossman, PhD., a Baltimore City resident, grew out of concern about the recent loss of the Merchants & Miners Transportation Company Building at 17 Light Street and other buildings of architectural distinction in Baltimore.

Ranging chronologically from the Peale Museum (1814) to the Baltimore Trust Company Building (1929), and in function from Old St. Paul's Church (1846) to the Gayety Theatre (1906), the ten landmarks selected for this study illustrate the enduring values of permanence, responsible stewardship, and tradition in architecture as an integral part of Baltimore's ongoing vitality, civic pride and unique identity.

In the spring of 2003, the Historic American Buildings Survey (HABS), a division of the National Park Service, David H. Gleason Associates, Inc., Architects, and Baltimore Heritage, Inc., in coordination with the City of Baltimore’s Commission for Historical and Architectural Preservation (CHAP) and the Goucher College Graduate Program in Historic Preservation, recorded a number of historic buildings and sites on Baltimore’s Lafayette Square through large-format photography and historical research.

One of a number of urban squares established in West Baltimore in the nineteenth century to encourage new residential development west of the city center, Lafayette Square, also known as Church Square for the number of congregations that settled in the area, defined fashionable city living for over 100 years. Although altered by the demolition of some prominent townhouses and institutional buildings, Lafayette Square retains much of its original architectural integrity–an integrity that today is threatened by the gradual erosion of the physical fabric of the neighborhood.

This project, resulting in over 50 large-format photographs by HABS photographer James W. Rosenthal and supplemented with historical research by HABS and Angela Shaeffer of Goucher College, grew out of an interest on the part of David H. Gleason Associates and its partners in raising public awareness of one of Baltimore’s most historically significant urban neighborhoods.

Ranging chronologically from the late 1860s to the turn of the century and stylistically from the Gothic to the Queen Anne and Romanesque revivals, Lafayette Square and its buildings chronicle the growth of an affluent West Baltimore neighborhood from its modest nineteenth-century beginnings as a rural retreat of green fields and oak trees and its remarkable metamorphosis in the early twentieth century into the spiritual and cultural center of West Baltimore’s African-American community. The Square, while significant in its own right as a landmark in the urban development of the city, rivals the city’s better known squares and institutions in the magnitude of its contribution to our understanding of the cultural development and evolution of Maryland’s largest city. It is hoped that this exhibit will encourage further exploration and preservation of Baltimore’s tremendously rich architectural heritage, both within the area of Lafayette Square and beyond.